Rainbow lorikeets forage in the barley mulch covering the garden to the east of the house.  The rising sun above them penetrates the thick fog, bringing warmth to a sleepy world.  Only bird sounds, work in the forest hasn’t started yet.  Cool air touches my knees, the kitchen window open encouraging the morning to enter, I sit with hot chai before my computer.  A smouldering fire is radiating much-needed warmth in the house, Snowie snuggled before it, she’s had her morning roam.  The fourth anniversary approaching, October 1st 2010 at 3.36pm, the birthday of Mahalia, the planned Sacred Healing Retreat.

Back to 2006… my partner often mentioned this place called Woodenbong, a possible place to invest he thought.  Heading back to Ipswich after a few days camping at Brunswick Heads, our favourite spot, we took a detour via Woodenbong.  I remember it clearly.  We stopped at a take-away on the main road, bought a cup of tea and sat at the old wooden table outside.  I glanced around, to the hall across the road, the houses up the street, I wasn’t very impressed, I thought it looked old and boring.  I was still in my swimmers with a sarong wrapped around, that may have been a first in this little village.  Fast forward and a property in Woodenbong was purchased.  I went down a couple of times, spending a few days alone in the house.  I fell in love with the monstrous skies, the abundant bird life and the air, oh the air.  Woodenbong sits near the border of NSW and Qld, mountain country, the air is wonderful. 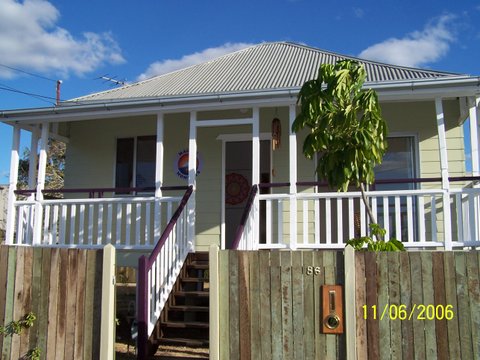 It was August 2007, Magick Moments, my healing centre was just over a year old.  Prior to the opening of the business, we spent nine months renovating this humble old workers cottage into a stunning beauty.  I’d been feeling a change approaching for a while, a big change; it made no logical, let alone financial sense… I tried to fight it.  I was feeling both restless and unsettled, a vast contrast to the enthusiastic commitment,  time and energy I’d been investing.  I’d put so much into creating this healing centre, I questioned myself again and again, all the usual things.  But the voice kept getting louder…  I kept resisting.   My second Saturn Return was approaching at the same time as a Full Moon Eclipse in Pisces, it sat on my natal Black Moon Lilith, the ancient wound of the Feminine.  I decided to spend a few days alone down in Woodenbong to try to get some clarity on what I was feeling.

The Eclipse was the most magickal I’ve ever experienced.  A blood-red Moon sat in a black velvet sky with stars that seemed to reach to eternity.  No sound, just this magickal air surrounding me.  I sat and watched till I could no longer stay awake, I felt something really profound was happening.

Early next morning, my Saturn Return, I went out to the back verandah, breathing in the luscious air, looking out at the awakening land, the expanse of clear blue above, it hit me instantly.  I could hardly believe what I was seeing and feeling, everything had changed.  I looked at the grass, the birds, the trees, the flowers and I could see that everything had changed.  I even asked them ‘how are you feeling?’, I wanted to know what had changed for them.  I can’t explain it anymore than… everything had changed.  I saw and felt it in everything.  I went in for my computer and attempted to write it down.  I knew I was witnessing something amazing, if only I could put it in words.

I went back to Ipswich, but rather than clearing my head and getting on with business, the voice became louder and I kept resisting.  It was one morning sitting at the breakfast table before going to Magick Moments, it was loud very loud.  It was like a heavy fist banging on the table,  with a voice roaring ‘NOW, it’s NOW’.  ‘ok’ (yes, a whimper in comparison) I said.  I surrended, no mean feat with a Scorpio Mars.  I began the dismantling, it took nine months to pack up both my home and my business.  I knew I had to do what I had been putting off, what was really important to me.   July 2008 I left for Adelaide to spend time with my son.

January 2010 I returned…  to my partner, my cat and all my ‘stuff’ in storage.  My houses sold, I no longer had my own home.  My life in Woodenbong began….